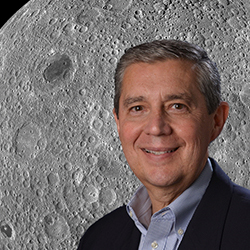 Taking Silicon Valley to the Moon

Doors: 6:45 PM Showtime: 7:00 PM Venue: Chautauqua@Home Virtual Series  Tickets: $15.00 ($12.00 Concert Member)* The Chautauqua@Home Virtual Series takes place on Zoom and will still capture the elements of a Community House series – a unique presentation by speakers, followed by Q&A from the audience. The day before each event, ticket buyers will be emailed with more information on how to join. This talk will focus on the future of human and robotic exploration of the Moon and beyond. Since the end of the Apollo program, the justification for the human space program has proven elusive. We will borrow a page from the Silicon Valley computer and commercial space companies to argue for an inspirational approach using new tools and technologies for the next phase of exploration. NASA’s Orion and Space Launch Systems along with new rockets and landers being developed by private companies such as SpaceX and Blue Origin will be described. We will argue that both the Moon and Mars can be explored through a combination of governmental programs, international partnerships, and public-private-academic partnerships. The tools for exploration include telerobotics where astronauts aboard NASA’s Lunar Gateway in orbit of the Moon will operate rovers and deploy telescopes on the lunar surface in a new synergy between robots and humans. About the Speaker: Jack Burns Jack Burns is a Professor in the Department of Astrophysical and Planetary Sciences and Vice President Emeritus for Academic Affairs and Research for the University of Colorado. He is also the Director of the NASA-funded SSERVI Network for Exploration and Space Science (NESS). Burns received his B.S. degree, magna cum laude, in Astrophysics from the University of Massachusetts. He was awarded a Ph.D. in Astronomy from Indiana University. From 2001 through 2005, Burns served as Vice President for Academic Affairs & Research for the University of Colorado System. Burns was Vice Provost for Research at the University of Missouri - Columbia from 1997 through 2001. He was Associate Dean for the College of Arts and Sciences at New Mexico State University (NMSU). Burns was Department Head and Professor in the Department of Astronomy at NMSU from 1989 until 1996. During his tenure at the University of New Mexico from 1980 to 1989, Burns served as the Director of the Institute for Astrophysics and was a Presidential Fellow. He was a postdoctoral fellow at the National Radio Astronomy Observatory from 1978 to 1980. Burns has 468 publications as listed in NASA’s Astrophysics Data System. Burns is an elected Fellow of the American Physical Society and the American Association for the Advancement of Science. He received NASA’s Exceptional Public Service Medal in 2010 and NASA’s Group Achievement Award for Surface Telerobotics in 2014. Burns was a member of the Presidential Transition Team for NASA in 2016/17. From 2014-17, Burns served as Senior Vice President of the American Astronomical Society, the world’s premier organization of professional astronomers. *All ticket purchases subject to service fees