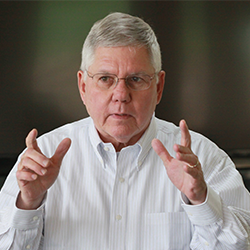 Charles Pellerin: "A New Physics in Our Lifetime?"

Chautauqua Community House Doortime: 7:00 PM Showtime: 7:30 PM Tickets: $15.00 ($12.00 Member*) To keep the music playing during this unpredictable time, we are requiring all patrons and staff to wear a mask while attending events at Chautauqua. To read more, click here. While we have a deep understanding of physics here on earth, 95% of the Universe remains perplexing. We first explore the central role of experiments  in advancing science. Then, examine a program created by the speaker to find this “new physics” using telescopes in space that span the electromagnetic spectrum. Spoiler alert: It has not succeeded, yet!  Charles (Charlie) Pellerin, PhD (Astrophysics), MBA (Harvard) In 1970, NASA/Goddard Space Center gave Charlie their highest patent-related monetary award for a “Two-axis Fluxgate Magnetometer” (US patent). He published in IEEE Transactions, then earned a PhD in Astrophysics from Catholic University publishing in Solar Physics and the Astrophysical Journal. He then received Catholic University’s Alumni Award for Outstanding Achievement in Science. Charlie earned an “Executive MBA” at the Harvard Business School’s Program for Management Development. In 1983, Charlie became NASA’s Director, Astrophysics. He led this multi-billion-dollar program for a decade building and launching 12 satellites. NASA awarded him the Creative Management Award, then an Outstanding Leadership Medal for excellence. Charlie invented the Great Observatories Program garnering over $20 Billion for space astrophysics. For this, the American Astronautical Society gave Charlie their highest award, the Space Flight Award. In 1990, Charlie’s team sent Hubble Space Telescope into space with a flawed mirror. He then mounted the space repair mission that fixed the telescope. For this NASA awarded him a very unusual 2nd Outstanding Leadership Medal. Nominated by NASA’s Chief of Staff, NASA awarded him the Distinguished Service Medal, “when the contribution is so extraordinary that other forms of recognition would be inadequate” for leadership of the Astrophysics Program. Charlie received a “Presidential Rank” award from Ronald Regan and from Bill Clinton for “sustained superior accomplishment.”  In 1995, Charlie founded “4-D Systems” with sales of $50 Million during 2002 to 2012. His team won the International Coach Federation’s 2007 Prism Award for “enhanced excellence and business achievement with quantitative measurements…”  His book, How NASA Builds Teams (Wiley, 2009) sells well in English and nine other languages. Charlie’s current passion is supporting human-developers worldwide in using his “4-D processes” to manage team Social Contexts, enhancing business performance and peoples’ lives. China Aerospace recently made Charlie an “Honorary Professor,” and Asia America Multi-Tech Association of China made Charlie a “Professor,” the 1st foreigner and 9th person ever to receive this honor. Following Hubble’s 25th anniversary, David Frigerio, a LA-based screenwriter wrote a movie about Charlie’s life and Hubble. Screenplay completed, we have a production company, All3 Medi with a “Sizzle Reel,” https://bit.ly/3maD1C0 to market the film.  In 2020, he hand-flew a Boeing 767-400 simulator (in the left seat) taxing, taking off, and landing using the Instrument Landing System (“ILS”). *All tickets subject to service fees
COVID-19 INFORMATION
COVID-19 related health protocols may be in effect at the time of performance, including, without limitation, required: mask or face coverings, symptom screening, and/or confirmation of no known symptoms of and exposure to COVID-19. The venue or event providers may unilaterally make changes to health protocols according to updated public health guidance and law. Any ticket holder who does not comply with any COVID-19 related health protocol may be required to leave the venue, and his/her ticket will not be refunded.   An inherent risk of exposure to COVID-19 exists in any place where people gather. COVID-19 is a contagious disease that can lead to severe illness and death. You and any recipients of the tickets you purchase assume all risks, hazards, and dangers arising from or relating in any way to the risk of contracting COVID-19 or any other communicable disease or illness, or a bacteria, virus or other pathogen capable of causing a communicable disease or illness, whether occurring before, during, or after the event, however caused or contracted, and voluntarily waive all claims and potential claims against event organizers, Colorado Chautauqua Association, the Show Presenter, the Artist, the Show Producers, and their respective parents, affiliates, subsidiaries, sponsors, successors and assigns and their respective officers, employees, contractors and agents.