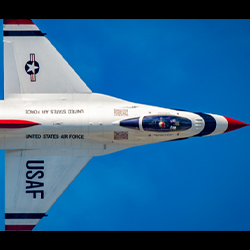 Developing Leaders of Character for the US Air Force

Cadets are appointed by their Senators and Congressmen from every state and district in the nation to attend the United States Air Force Academy. From the moment they arrive at the Academy, cadets are immersed into a culture that requires strict adherence to a code of honor, high standards of ethics, behavioral norms that further respect and dignity for all human beings and much more. This discussion will cover the education, training and various experiences that USAF Academy cadets receive to shape them into the leaders we trust. These leaders will handle billion-dollar weapons systems and authority over hundreds of Airmen and Department of Defense civilians shortly after graduation.  About the Speaker:  Mark Hyatt, Colonel USAF Retired, Director Emeritus, Center for Character and Leadership Development, USAF Academy Mark Hyatt is a passionate educational entrepreneur. His favorite quote is: “If you save one child, you save the whole world.” Calling Colorado home since 1970, he’s served as a fighter pilot squadron commander in the Air Force, advisor to Secretary of Defense, current White House Administration and previous President on school choice, safety, social climate and culture issues. He’s also served as Vice Commandant at the USAF Academy, Director of the Center for Character and Leadership Development, President of the largest charter school in Colorado, The Classical Academy and Executive Director of the Charter School Institute in Denver. He’s testified at the Colorado Legislature to keep partial funding to public schools for home-school students. His most important job is being married for 40 years and having three children and five grandchildren.