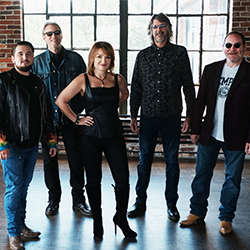 The Steeldrivers with Wood Belly

“Bad For You,” the fifth album from Nashville's hard-edged bluegrass band The Steeldrivers, arrives after a period of triumph and adaptation. The band's 2015 release, “The Muscle Shoals Recordings,” won the Grammy Award for Best Bluegrass Album. In bluegrass and acoustic music circles, respect for this Nashville quintet is so strong that the win seemed somehow inevitable, like a box being checked off. For the band though, as well as its passionate audience of Steelheads, it was a much bigger deal. The Grammy validated the vision and collective striving of a string band with a rock and soul heart. Industry recognition and better bookings followed. Then just when the follow-up album was coming together, vocalist and guitar player Gary Nichols decided he needed to go his own way. It was a setback, to be sure. Negotiating the transition from the magisterial soul country voice of band co-founder Chris Stapleton to Nichols had taken work and perseverance, but it had led to the most cohesive, impactful Steeldrivers to date. With a second singer on his way out in eight years, there were questions about how to go forward, if they could at all. But this was a unique, highly resilient band, rooted in the kind of mutual respect that only many years of personal history can forge. This event is co-produced in collaboration with Z2 Entertainment. Stay updated on all events from Z2, including events at the Boulder Theater and Fox Theatre, by signing up for their newsletter here. *All ticket purchases subject to service fee.