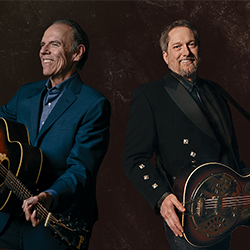 An Evening with John Hiatt and The Jerry Douglas Band

“You know how writing goes for me,” John Hiatt says, offering a glimpse into his creative process. “I get a couple of lines going, and then just tag along as the songs start to reveal themselves. You’ve just gotta jump inside and take the ride.” Hiatt has been on that ride – as have we all, tagging along right beside him – for more than four decades now. In fact, since the release of his 1974 debut, “Hangin’ Around the Observatory,” rarely has more than a year or two passed without a new Hiatt collection hitting the shelves.   Dobro master and 14-time GRAMMY winner Jerry Douglas is to the resonator guitar what Jimi Hendrix was to the electric guitar, elevating, transforming and reinventing the instrument in countless ways. Additionally, Douglas is a freewheeling, forward-thinking recording and touring artist whose output incorporates elements of country, bluegrass, rock, jazz, blues and Celtic into his distinctive musical vision.  This event is co-produced in collaboration with Z2 Entertainment. Stay updated on all events from Z2, including events at the Boulder Theater and Fox Theatre, by signing up for their newsletter here.