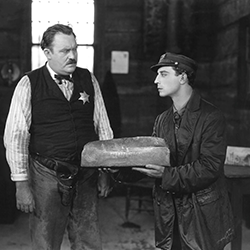 Chautauqua Auditorium  Doors: 6:00 PM Showtime: 7:00 PM Tickets: $14.00 ($7.00 Concert Members*) Join us for the much-anticipated return of Chautauqua’s Silent Film Series at the Chautauqua Auditorium! Featuring the pianist Hank Troy providing musical accompaniment, this time-honored tradition at Chautauqua promises to entertain and delight with a unique performance for all ages. A curmudgeonly riverboat captain (Ernest Torrence) receives a visit from his long-lost son (Buster Keaton), who turns out to be a dandy college kid who wears foppish clothes and plays the ukulele. But when fate intervenes — in the form of a hurricane — Buster proves he has the strength and courage of his father. This comedy features some of the most incredible stunt work of Buster’s career. We will be screening Rodney Sauer’s tinted 16mm print of this film, along with the rare Charley Chase comedy Limousine Love, which is still not available on digital video.  *All tickets subject to service fees