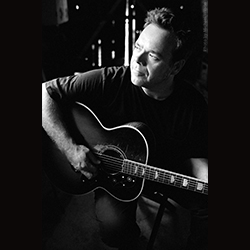 An Evening with Jeff Black

Chautauqua Community House Doors: 7:30 pm Showtime: 8:00 pm Tickets: $20.00 ($17.00 Concert Member)* Jeff Black's songs have earned Grammy recognition, radio chart-topping stats and numerous BMI awards. Although flying below the radar as a performer himself, he has been recognized by NPR as a musical pioneer in the digital age and his catalogue of critically acclaimed albums continues to grow. Composing music for film and television, his credits include numerous indie film soundtracks and a repertoire of songs cut by artists as diverse as Alison Krauss & Union Station, Waylon Jennings, BlackHawk, Dierks Bentley, Jon Randall, John Oates, Jerry Douglas and Sam Bush. Black has forged a reputation as a true folk troubadour entertaining audiences globally for over three decades. A master songwriter and performer in the tradition of the great storytellers, his passionate, soul-driven live performances of songs from his vast catalog are not to be missed. *All ticket purchases subject to service fees.