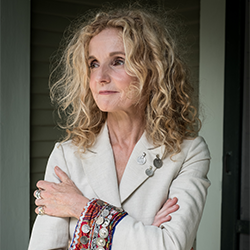 Chautauqua Auditorium  Doors: 6:30 PM Showtime: 7:30 PM Tickets: $33.00 - $48.00 ($30.00 - $45.00 Concert Member)* Widely regarded among the best pure songwriters of this or any other era, Griffin has had her work performed by a truly epic assortment of her fellow artists, among them Linda Ronstadt, Emmylou Harris, Solomon Burke, Kelly Clarkson & Jeff Beck, Martina McBride, and Miranda Lambert to name but a few. Her songs have also been showcased in a variety of film, TV, and theatre projects, with her original music and lyrics featured in the 2007 musical, 10 Million Miles, produced Off-Broadway by the Atlantic Theatre Company and directed by Tony Award- winner Michael Mayer. 2019 saw the acclaimed release of the renowned artist’s Grammy Award-winning 10th studio recording, PATTY GRIFFIN, on her own PGM Recordings label via Thirty Tigers. An extraordinary new chapter and one of the most deeply personal recordings of Griffin’s remarkable two-decade career, the album collects songs written during and in the aftermath of profound personal crisis, several years in which she battled – and ultimately defeated – cancer just as a similar and equally insidious disease metastasized into the American body politic. As always, Griffin’s power lies in how, as writer Holly Gleason observed in Martha’s Vineyard Gazette, “her songs seem to freeze life and truth in amber.” This event is co-produced in collaboration with Z2 Entertainment. Stay updated on all events from Z2, including events at the Boulder Theater and Fox Theatre, by signing up for their newsletter here. *All ticket purchases subject to service fee.