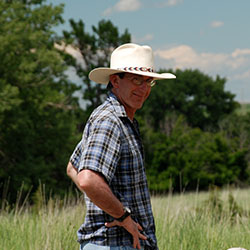 Douglas Bamforth: Ethnogenesis on the Central Plains, 1250 to 1400

with Douglas Bamforth, professor and chair of Anthropology, CU Boulder

Doors: 6:30pm Showtime: 7:00pm Colorado Chautauqua Community House Tickets: $12.00 ($9.00 Concert Member)* Human history is full of examples of human beings moving and making new communities in difficult times.  This talk examines archaeological sites along Ponca Creek, in northeastern Nebraska, where work by the University of Nebraska in the mid-20th century and new work by CU Boulder and Augustana University suggests a similar process of change.  The mid - to late 13th century saw drought and disruption over much of North America, and it seems increasingly clear that new people moved into the Central Plains from the Midwest at the same time that indigenous people abandoned parts of their traditional territory.  These groups may have met and intermingled along Ponca Creek, ultimately forming new societies that led up to the modern Pawnee and Arikara nations.  We have much still to learn about these sites, but the work done to date tells us much about a critical period of change on the Plains. About the Speaker:   Douglas B. Bamforth received his BA from the University of Pennsylvania in 1978 and his MA (1983) and Ph.D. (1986) from the University of California at Santa Barbara.  Although his research has emphasized the Paleoindian occupation of the Great Plains, he has worked on archaeological field and laboratory projects in Nevada, coastal California, the Mojave Desert, coastal Georgia, Texas, Colorado, Nebraska, southwestern Germany and Ireland.  He is the author of “Ecology and Human Organization on the Great Plains (1988)” and “The Allen Site: A Paleoindian Camp in Southwestern Nebraska (2007).” Bamforth has also published on Paleoindian human/environment interactions, lithic technology, bison ecology, theoretical issues in archaeology, warfare and the Irish Neolithic.   Most recently, his work focuses on recent horticultural occupations on the Great Plains, where he is beginning a collaborative project with Augustana University on social changes on the central Plains in the 13th through 16th centuries.  Bamforth is a professor in the Anthropology department at the University of Colorado Boulder. *All ticket purchases subject to service fees.