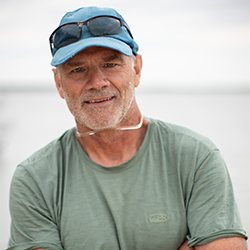 Doors: 6:45 PM Showtime: 7:00 PM Venue: Chautauqua@Home Virtual Series Tickets: $12.00 ($9.00 Concert Member)* The Chautauqua@Home Virtual Series takes place on Zoom and will still capture the elements of a Community House series – a unique presentation by speakers, followed by Q&A from the audience. The day before each event, ticket buyers will be emailed with more information on how to join. On assignment for the National Geographic, Jonathan Waterman embarked on an intensive research project to celebrate the National Parks in an unprecedented new book, the large-formatted, 500-page Atlas of the National Parks.  Waterman, a former park ranger, has spent four decades—paddling, working as a rescuer, climbing and exploring—from the embattled Everglades to the continent’s highest mountain, Denali.   As the award-winning author of 14 books, he has lectured before Congress on climate change and spoken to hundreds of audiences about environmental awareness in a rapidly changing world.  As a role model, his story about the parks concerns his own career journey: from dirt-bag climber, to park service ranger, to wilderness spokesperson and National Endowment of the Arts Literary Fellow. About the Speaker:  Jon Waterman Jon Waterman started shooting photographs on his expeditions three decades ago, but also found his calling and is principally known as a writer. He has starred in, filmed, and written films for television, including “The Logan Challenge” (PBS, 1991), “Surviving Denali” (ESPN, 1994), “Odyssey Among the Inuit” (OLN, 2000), ANWR Trek (PBS 2007), and "Chasing Water" (Pete McBride films, 2011). To support his work, he has received three grants from the National Geographic Society Expeditions Council, two grants from the Walton Family Foundation, and grants from the Storer Foundation, SavetheColorado.org, the Kenney Brothers Foundation, New Belgium Brewing, Patagonia, and the Campion Foundation. *All ticket purchases subject to service fees.