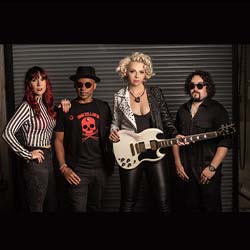 All tickets subject to service fees*

COVID-19 INFORMATION
COVID-19 related health protocols may be in effect at the time of performance, including, without limitation, required: mask or face coverings, symptom screening, and/or confirmation of no known symptoms of and exposure to COVID-19. The venue or event providers may unilaterally make changes to health protocols according to updated public health guidance and law. Any ticket holder who does not comply with any COVID-19 related health protocol may be required to leave the venue, and his/her ticket will not be refunded.   An inherent risk of exposure to COVID-19 exists in any place where people gather. COVID-19 is a contagious disease that can lead to severe illness and death. You and any recipients of the tickets you purchase assume all risks, hazards, and dangers arising from or relating in any way to the risk of contracting COVID-19 or any other communicable disease or illness, or a bacteria, virus or other pathogen capable of causing a communicable disease or illness, whether occurring before, during, or after the event, however caused or contracted, and voluntarily waive all claims and potential claims against event organizers, Colorado Chautauqua Association, the Show Presenter, the Artist, the Show Producers, and their respective parents, affiliates, subsidiaries, sponsors, successors and assigns and their respective officers, employees, contractors and agents.